“I hope that this collaboration can lead to better and conflict-free international cooperation based on the scientific principle. For the Thai scientists, researchers and students involved, to be accepted for participation in a scientific endeavor like this is a very positive sign on our standards of education and quality of the people.”

to Professor Rolf-Dieter Heuer, the Director of CERN at Srapathum Palace in Bangkok on October 10, 2013

Perhaps the most ambitious royal initiative of H.R.H. Princess Maha Chakri Sirindhorn to date is sponsorship of the collaboration of Thai students and scientists with CERN, the organization which is trying to unravel the very nature of matter. From the CERN website: “At CERN, the European Organization for Nuclear Research, physicists and engineers are probing the fundamental structure of the universe. They use the world’s largest and most complex scientific instruments to study the basic constituents of matter – the fundamental particles. The particles are made to collide together at close to the speed of light. The process gives the physicists clues about how the particles interact, and provides insights into the fundamental laws of nature.”

CERN is the European Organization for Nuclear Research, based in Geneva. The name CERN is derived from the acronym for the French “Conseil 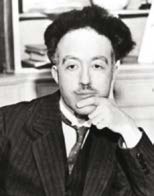 Prof. Dr. Pairash therefore co-ordinated and consulted with executives at CERN and Synchrotron Light Research Institute (public organization) operating projects aimed at promoting basic and applied scientific research in Thailand) about the possibility to develop a scientific or academic collaboration. This led to the signing of an expression of interest in the participation of physicists from universities and research institutes from Thailand in the CMS (Compact Muon Solenoid) Experiment at the CERN LHC Accelerator.

The collaboration opened an opportunity for Thai physics students and teachers to participate in a CERN summer program and join in experiments in high-power particle physics. Her Royal Highness presided as chairwoman and witness to the signing ceremony while she was on her third visit to CERN, in March 2009.

In 2009, the Sub-committee on Academics and Research with CERN was set up in order to oversee the co-operation between Thai organizations and CERN. Synchrotron Light Research Institute (Public Organisation) and the National Science and Technology Development Agency (NSTDA) are co-secretariats of the sub-committee. Collaboration are working activities that have been implemented are CERN School Thailand and CERN’s WLCG Grid Computing. Later, the name of the sub-committee has been changed to the Committee on CERN-DESY Academic and Research Collaboration to make collaboration with CERN and DESY under the purview of the same committee for better synergy. 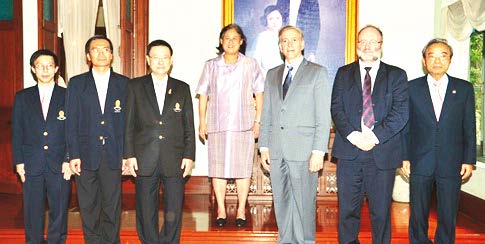 What is CERN doing?

The primary research at CERN is involved with particle physics. The CERN facility on the Franco-Swiss border near Geneva houses the Large Hadron Collider (LHC), the world’s largest and most powerful particle accelerator. 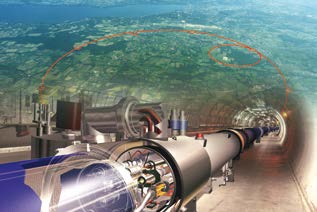 The LHC consists of a 27- kilometre ring of superconducting magnets with a number of accelerating structures to boost the energy of the particles along the way. When particles collide, they fragment into smaller particles which are detected by the supersensitive instruments at CERN.

The scientists at CERN wrestle with questions about the very nature of matter and energy. For example, the ‘Big Bang’ bang should have created equal amounts of matter and antimatter, or dark matter. So why is there far more matter than antimatter in the universe?

Scientists at CERN are also trying to pin down a very elusive particle / the Higgs boson. It is thought that elementary particles may have gained their mass from the Higgs boson.

Many Modern Wonders were Created at CERN

The cutting edge research at CERN has led to new technologies that people today would find it difficult to live without. In 1989, the World Wide Web was given birth at CERN because computer scientist Tim Berners-Lee and his team wanted to be able to link scientists working across the globe on CERN-related experiments.

The touch-screen display, introduced in 1973, was developed by engineers at CERN.

CERN scientists were responsible for significant improvements in Positron Emission Tomography (PET) in 1977.

The world’s first web server Many Modern Wonders were Created at CERN The cutting edge research at CERN has led to new technologies that people today would find it difficult to live without. In 1989, the World Wide Web was given birth at CERN because computer scientist Tim Berners-Lee and his team wanted to be able to link scientists working across the globe on CERN-related experiments. The touch-screen display, introduced in 1973, was developed by engineers at CERN. CERN scientists were responsible for significant improvements in Positron 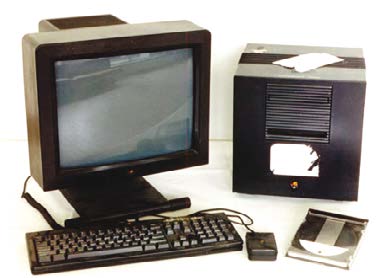 At present Thailand lacks the technological resources, funding and capability to create a facility like CERN. Through the efforts of H.R.H. Princess Maha Chakri Sirindhorn, however, Thai students and researchers have been given the opportunity to learn, work and train with top notch academics and science professionals at this world’s eminent international institute. The experience enhances the quality of Thai personnel and also establishes a productive relationship with a great many talented and highly skilled scientists. Thus the vision of Her Royal Highness has paved the way for a more technologically capable and prosperous society.